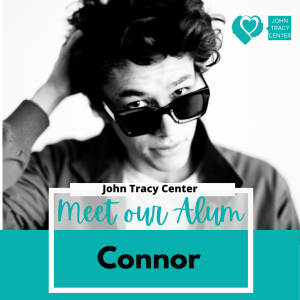 Born in California in1999, when hearing tests were optional for a newborn, Connor Silver’s parents were told he was in perfect health. As the months passed, though, the signs pointed to the fact that something was not right with his hearing. It was not until he was two years old he was diagnosed with a severe hearing loss.

Soon after Connor was diagnosed, he was referred to the John Tracy Center, His parents mention that “JTC was the stepping stone to the journey he finds himself today. Attending John Tracy Center’s Preschool gave him the ability to learn how to speak, communicate, and gave him the stepping stones into understanding how to carry daily conversations.”

Carrying with him the skills from JTC, Connor was able to begin attending a mainstream elementary school with the care and support of an audiologist and a trained staff.  Connor was able to further hone his hearing, listening, and speaking skills in a mainstream middle school and high school.  He followed his passion and soon discovered a love for tennis and photography. Attending an art driven high school, Connor was able to gain an outreach for his photography in which he was able to showcase his work to the public – and was even acknowledged in collaborative projects with Adidas, Nike, Footlocker, These Streets Magazine, and others.

Currently, Connor is about to begin his Junior year as a Business Major at the California State University of Los Angeles.  Connor wants to continue to explore his passions in Photography and other Mediums while still pursuing his studies in Business.

Connor feels a tremendous desire to give back to the deaf and hard of hearing community by creating social outreach to families within the JTC community. Connor said, “ Without JTC, Connor believes that he would stand where he is today”.

Posted in Spotlight
We use cookies on our website to give you the most relevant experience by remembering your preferences and repeat visits. By clicking “Accept All”, you consent to the use of ALL the cookies. However, you may visit "Cookie Settings" to provide a controlled consent.
Cookie SettingsAccept All
Manage consent

This website uses cookies to improve your experience while you navigate through the website. Out of these, the cookies that are categorized as necessary are stored on your browser as they are essential for the working of basic functionalities of the website. We also use third-party cookies that help us analyze and understand how you use this website. These cookies will be stored in your browser only with your consent. You also have the option to opt-out of these cookies. But opting out of some of these cookies may affect your browsing experience.
Necessary Always Enabled

Performance cookies are used to understand and analyze the key performance indexes of the website which helps in delivering a better user experience for the visitors.

Analytical cookies are used to understand how visitors interact with the website. These cookies help provide information on metrics the number of visitors, bounce rate, traffic source, etc.

Advertisement cookies are used to provide visitors with relevant ads and marketing campaigns. These cookies track visitors across websites and collect information to provide customized ads.

Other uncategorized cookies are those that are being analyzed and have not been classified into a category as yet.

SAVE & ACCEPT
Scroll To Top